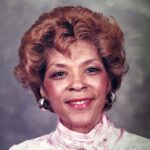 Bernardine was born January 29, 1937 in Chattanooga, Tennessee, the only child of Raymond and Helen Murden. The family moved to Akron, Ohio for a short while before permanently settling in Cleveland, Ohio. Before her graduation from East Technical High School and throughout her first marriage (James Smith), Bernardine’s striking looks propelled her into the world of modeling. She graced numerous runways throughout the Midwest as a member of Eve Brown’s modeling agency.

Bernardine eventually decided to continue her education by attending Case Western Reserve University, where she received her bachelor’s degree in psychology. She achieved this success during her second marriage (Jackie Waters), after sending the youngest of her six children off to kindergarten.

Bernardine had a curiosity that led her to engage in many professions, including home-school liaison officer for the East Cleveland Board of Education, owner of her own dress shop (“Let Me Dress You”), tax professional at H&R Block, and acting dean of a business college. She even studied to be a Unity minister! During this period, her third marriage (George Taylor) ended amicably.

Through the challenging times of losing her father, mother, a son (Shelley Waters) and a grandson (Michael), Bernardine continued to uplift others with her spiritual newsletters. She retired from the Port of Cleveland to enjoy the laughter of her grandchildren (who call her, “Taylor – Grandma sounds too old”) the changing colors of the leaves, and a good romance novel.

Bernardine will be missed, and she leaves many who will honor her memory. Children: Daryl, Michael, Suzanne, Bonnie and Maryellen; grandchildren: Amber, Brian, Kim, Jade, Rose; great-grandchild: Everly; cousins, in-laws and a host of friends. The family will plan a memorial at a later date.