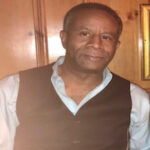 Carlton Monroe, of Cleveland, Ohio, passed away on September 18, 2020 at the age of 66.
He was the first son born to parents LaVerne Rone-Monroe and Benjamin Franklin Monroe
on March 1, 1954.

As a young man, Carlton joined the U.S Marines to serve his country. Later through the
years, Carlton found his calling, along with his wife Margaret, and started a new path
toward Seminary. They both left their home state of Ohio and moved to California where
they both received their Master of Divinity at Pacific Lutheran Theological Seminary in
Berkeley, CA.

Carlton loved exploring, traveling, many, many genres of music, and was very adventurous.
He had a knack for direction and could give you directions to anywhere, which is where his
nickname “OnStar” lovingly stemmed from. Carlton loved cars-fast, flashy cars, and took
care of each of his cars meticulously. Carlton always had a humongous presence, was a
fierce protector for his family and friends, and could give you a life lesson on just about
anything. The most treasured love for Carlton was his wife Margaret, preceded in death. It
was hard to find one without the other, as they each measured their steps together
throughout their marriage. They both shared in the same passion and devotion to the Lord
our Savior.

The Lord called his disciple Carlton to be reunited with his wife Margaret, his mother
LaVerne, his father Benjamin, his brother Reginald, and a host of other loved ones who also
preceded him in death.

“And we know that that in all things God works for the good of those who love him, who
have been called according to his purpose.”