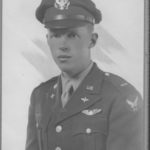 Clayton L. Hogg was born in l924 in Kansas on a farm, and surviving the Dust Bowl and Great Depression. Clayton L. Hogg of Chagrin Falls, Ohio, died on July 13, 2020.

Survivors include all of his siblings, Gladys, Barbara and Darrell; his children Mary Chalk (Rob); Margaret Hogg-Allen; Christine Renner; David (Debbie) Hogg; and James Hogg, as well as several grandchildren and great-grandchildren. He was preceded in death by his wife, Frances Hogg, and his parents Rolla and Vida Hogg.

Clayton served in World War II from l943 to l946, and graduated as a pilot from the US Army Air Corps. He received BS and MS degrees from Kansas State Teachers College and taught in two Kansas towns, as a physics teacher. He re-entered the service in l953, completed meteorology training at the University of Washington, and served as a career officer in the Air Force as a meteorologist. He retired in l970.

Clayton had many hobbies and pastimes: photography, music, history, genealogy, ham radio, travel all over the US and the world, among many others. He was a Toastmaster for several years and volunteered at the Cleveland Art Museum.

Thank you to the staff of the Village at Marymount and Cleveland Clinic Hospice for their care of Clayton.