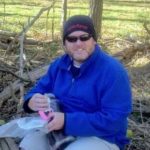 On Sunday, September 20, 2020 David Michael Porter, age 51, passed away after a year long battle with cancer. He went to join his amazing sister, Phyllis Ann Porter and father, Oscar Junior Porter in the next chapter of life.

Dave enjoyed Geocaching, Munzee and Flagstack. He also enjoyed finding and playing new games and always had a twist to keep things new and exciting. He was a supportive uncle and it was very important to him to have a positive impact on the lives of his nephews, Justin Trotter and John Rose.  Dave always supported them in whatever interests they had, whether it was attending Friday night football games to watch John participate in band, helping learn card magic, teaching and attending chess events with Justin or playing disk golf, to name a few.

During his time on earth, he touched so many lives and left a lasting impact on those who knew him. He had a great group of childhood friends that he leaves behind, Matt, Ricky, Randy, Josh, Jay and Lou, which he enjoyed getting together to play cards with, fantasy football, as well as taking many adventurous excursions throughout the years.

Dave’s most recent employment was with Veterans Affairs and lastly with DFAS. He raved about the people he worked with and was so thankful for the support and flexibility during his cancer treatment. He was most proud of his time teaching English and living abroad in China and South Korea helping students learn with a creative approach. He spent many years as a volunteer flag football coach with the local recreation center.

In addition to his nephews and friends, he leaves behind a grieving sister, Tammy Porter, and mother, Doris Porter. His sister was able to spend his last days around the clock with him and in his final hours, with all the breath and energy he had, repeated over and over to her, I love you SO much.

Dave fought hard and did whatever the Dr.s said to do to try to cure his cancer. He was still making future plans and thought he had more time.

Dave was a private person and requested to be cremated and to have a private ceremony at a later date to bury his ashes near a tree at the Grand Canyon.

In remembrance of Dave, he would want you to leave a positive footprint wherever you go. Always leave someone feeling better than they did before talking to you. Focus on other’s strengths and give praise and recognition when deserved.