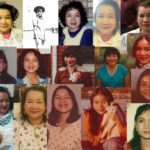 A first generation US Citizen from Thailand – Supaporn “Anna” Frieden passed away peacefully at her son’s home in Euclid, OH on Saturday, July 25th 2020 at the age of 71. She was known by many as “Anna”. Her Thai maiden name is Supaporn Pleumchit. Anna was born on the family farm in Korat, Thailand (Nakhon Ratchasima Province) on December 4th 1949 with her Thai mother, Nil Pleumchit, and Chinese Father, Chuen Pleumchit. Anna was the youngest out of 6 siblings children. Anna was a brave, wise, innocent, and loving mother, grandmother, and friend to many. She was a master seamstress and fashion designer for many years.

While in Bangkok, Thailand – she became a GOGO girl, a bartender, joined a biker gang, and a single mother of 3 children – OUin, Neet, and Waaseana. When Anna was 21, her mother died. When Anna was 24, she met a United States Air Force Sgt who she would marry in 1974. Forced to leave her children behind with her aunt due to US Government regulation, she came to the United States in 1975. Throughout the years she continued to fight to bring her children she left behind in Thailand to the United States. Even after death, she never got to see them again.

While in the United States she received her US Citizenship and high school diploma while learning English in 1982. She endured to have the best American dream while raising 4 children in the USA. Anna’s legacy lives on through her children and grandchildren. Her Thai traditions through cooking and wisdom will flow through them to be never forgotten.