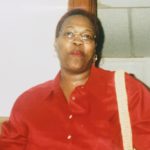 On July 6, 2020, Marchelle “Marcy” St. Clair passed away peacefully at 59 years old. She was surrounded by family in her last days.

Marcy was born on October 18,1960 in Cleveland Ohio. She was baptized into the Catholic faith and accepted Christ at an early age. She attended Cleveland Heights High School and later attended Wooster Business College. She worked as a manager in the food industry and retired in 2014 due to complications with her health.

Marcy was an avid reader. In addition, she loved cooking for people and trying new recipes. Her favorite pastimes also included socializing, playing the lottery, and watching movies and cooking shows. She enjoyed music and dancing and was often the life of the party. Her humor and wit were second to none. She was loved by all who crossed her path, and her “sayings” were, and still are, often talked about and repeated by many. Just the mention of “Marcy” brings a smile and a story. She will live on in the memories of all those who had the pleasure of knowing and loving her.