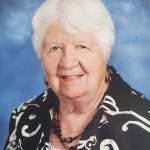 Shirley was born in Cleveland to Arthur and Caroline (nee Browning) Tupholme, graduated from Cleveland Heights High School in 1942. Shirley was an avid golfer and a member of CVCC. She was very interested in gardening and participated in several Garden Clubs and a member of Holden Arboretum. Church was a very important part of her life and she was a long-time member of Garfield Memorial then later transferring to Federated Church of Chagrin Falls. She and her husband Roy were long time participants of the Cleveland Orchestra and Blossom Music Center.

A memorial service will be announced at a later date. Any contribution maybe made to Holden Arboretum, at 9500 Sperry Road, Kirkland, OH 44094.